Full Name
Jason Silva
Job Title
Emmy-nominated Host
Company
National Geographic Channel's Brain Games
Twitter Handle
@jasonsilva
Speaker Bio
Jason Silva is the Emmy-nominated host of National Geographic Channel’s #1 rated and Emmy-nominated series, Brain Games, seen in over 100 countries.
“A Timothy Leary of the Viral Video Age” was how The Atlantic described television personality, filmmaker and philosopher Silva, who has also been described as “part Timothy Leary, part Ray Kurzweil, and part Neo from ‘The Matrix.’”
A self-professed wonderjunkie, Silva is the creator of the web series “Shots of Awe,” micro-documentaries exploring creativity, innovation, disruptive technology, futurism, metaphysics, existentialism and the human condition. In short: Philosophy, Science and Art for the YouTube generation. The videos, which “play like movie trailers for ideas,” according to The Atlantic, have spread like wildfire across the internet and have been viewed more than 13 million times.
Jason also created the web series “Future of Us” for AOL, exploring exponential technology and the future of humanity.
The Imaginary Foundation wrote of Silva, “like some kind of Ontological DJ, he recompiles the source code of western philosophy by mixing and mashing it up into a form of recombinant creativity, which elevates understanding from the dry and prosaic, to a sensual cognitive romance.”
Others have described Silva as “a modern performance philosopher, a Digital DJ, a re-vitalizer and remixer of optimism, and above all, a curator: of ideas, of inspiration, and of awe…like a trumpet player or modern-day digital Mingus, he jams, riffs and rhapsodizes through a tumbling thicket of ideas with such a sharp and vital alacrity that it can take the breath away.”
An active and prolific global speaker, Jason has spoken at TEDGlobal, Google’s Zeitgeist Conference, keynoted multiple events for Microsoft, IBM, Adobe, Oracle, Electronic Arts, Honeywell, PEPSICO, Intel, Dolby and many more, all over the world.
He was also keynoted at the Tribeca Film Festival, The Sydney Opera house, The Economist Ideas Festival, The DLD Conference, The Singularity Summit, the PSFK Conference, Mexico’s Ciudad De Las Ideas, Seattle’s Interactive Conference, Chicago Ideas Week, the main stage at SXSW Interactive and the MainStage at CANNES LIONS festival of Creativity.
Speaking At
Opening Keynote: Become an Organization of the Future 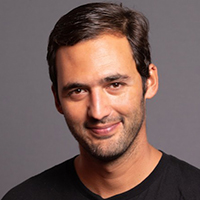